Popadelics Crunchy Mushroom Chips are shiitake mushrooms reimagined for the modern superfood snacker that bursts with flavor and packs an addictive crunch. 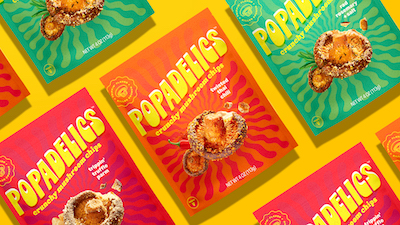 Popadelics’ unique, vacuum frying cooking process paired with creative flavor combinations results in an unmatched experience that is incredibly tasty with a satisfying crunch – all while championing the added benefits found in shiitake mushrooms.

First cultivated in China between 1000 and 1100 A.D., the shiitake mushroom is revered for its culinary and reputed medicinal qualities. For thousands of years, those looking to boost longevity and reduce inflammation coveted the magic morsels. In Chinese culture, the shiitake mushroom, known for its aphrodisiac qualities, is a symbol of youthfulness and virility. In ancient days, to cultivate shiitake mushrooms, a tree log was inoculated with collected shiitake mushroom spores and left out in a moist atmosphere. Logs inoculated at a child’s birth would mature with them until they reached adulthood, after which they would inherit the prized, mushroomed logs.

Today, shiitake mushrooms are primarily grown in Japan and are loved worldwide for their superb taste and nutritional qualities. While typically eaten like vegetables, shiitake mushrooms are fungi that grow naturally on decaying hardwood trees. The name shiitake is taken directly from its Japanese name, and the mushroom is also known as the black mushroom or oakwood mushroom.

With Popadelics, we decided to take the magic of shiitake mushrooms one step further. To produce its signature crunch, Popadelics Crunchy Mushroom Chips leverage a unique cooking method called vacuum frying, which allows foods to cook at much lower temperatures while absorbing less oil and retaining more of their color, nutrients, texture, and flavor. Popadelics are also vegan and a good source of protein and fiber. Popadelics is currently available in three addictive, mouth-watering flavors — Trippin’ Truffle Parm, Twisted Thai Chili, and Rad Rosemary + Salt. Packed with incredible flavor and a dense, crispy texture, our vegan snacks will have you trippin’ off the taste!